Akufo-Addo Is Building An Inclusive Ghana With Pragmatic Policies – Bawumia

The Vice President, Dr. Mahamudu Bawumia says pragmatic social intervention policies introduced by the government of President Akufo-Addo has contributed significantly to building an inclusive nation, which is leaving no one behind.

Addressing Muslims and Ghanaians during the National Virtual Eid ul Adha Prayer at the Ghana Broadcasting Corporation in Accra on Friday, Dr. Bawumia said government’s social intervention initiatives, such as Free SHS, One Village One Dam, One District One Factory, Zongo Development Fund, One Constituency One Million Dollars, Planting for Food and Jobs, among others, are designed to carry along the poor and deprived members of society, who largely live in rural areas, zongos and inner cities.

“Building an inclusive society requires pragmatic government policies to ensure everyone is covered. This has been the focus of the Akufo-Addo government, and this thinking is evidently clear in broader social intervention policies of our government,” Dr. Bawumia said.

“The poor and deprived in Ghana largely live in rural, inner city and zongo communities; and have historically been excluded in many aspects of governance and access to opportunities and government services in this country.”

The Vice President said prior to the government of President Akufo-Addo assuming office three years ago, it identified that apart from limited opportunities to access education due to cost and under development, the poor, deprived, rural, innercity and zongo dwellers generally faced a number of common problems such as poor identity documentation, poor residential addresses, lack of TIN numbers and bank accounts, no ambulances, declining agricultes, unemployment, whom you know syndrome, etc., which entrenched their exclusion from many aspect of governance.

“These problems mean that the excluded, by and large, are forced to operate in the informal sector of the economy.

“President Nana Akufo-Addo thus promised to build an inclusive society where no one is left behind regardless of tribe, geographical location, gender, religion or income status.”

“The poor and deprived in Ghana have for far too long been fodder for flowery and sugar-coated speeches by politicians, especially at election time. For Nana Akufo-Addo, what matters is not what you say you are going to do for the poor and deprived, but what you actually do when you are given the opportunity to serve.”

“All that Ghanaians want, especially the poor and the less privileged, is to be able to have good drinking water, toilet facilities, fertilizer, insecticides, good roads, ability to send their children to school, good healthcare, stable and affordable electricity, telephone network, and so on.”

Dr. Bawumia noted that the outbreak of the Coronavirus pandemic has further exposed the difficulties of the less privileged in society, adding that the pandemic has reinforced the Akufo-Addo government’s belief and determination to build an inclusive society, which cares for the poor and deprived in our country.

“This is the reason why apart from government’s sustained efforts at curbing the spread of the virus, it has also made it a topmost priority to alleviate the effects of the pandemic on businesses and Ghanaians, especially the poor and the less privileged,” he said.

“Since the outbreak of the pandemic in March, Government has taken bold steps such as the distribution of hot meals and water to the less privileged during the lockdown, free electricity to lifeline consumers and 50% reduction for others, 100% subsidy on water bill, 600 million Cedis stimulus package to small enterprises.”

Having established a Ministry for Zongo and Inner City Developmen, and the Zongo Development Fund which are ensuring inclusive, sustainable development in Zogos.

The Vice President said through the Ministry and ZDF, development initiatives such as building and renovation of classrooms, clinics, ICT centres, toilet facilities, roads, bridges, water, multi purpise astro and green parks, drainage systems, vocational training, entrepreneurial training and support, provision of 40 scholarships from brilliant but needy students from Zongos to study medicine in Cuba have all taken place in the past three and half years in Zongos and inner cities.

16 MODEL SENIOR HIGH SCHOOLS IN ZONGOS IN EACH REGION

While assuring the people of Zongo of President Akufo-Addo’s commitment to their welfare and development, especially in the area of infrastructure and education, Dr. Bawumia evealed that God willing, n the next term of President Akufo-Addo, his government will build sixteen model senior high schools in Zongos in each of the sixteen regions.

“President Akufo-Addo is more committed to uplifting education in Zongo communities. As a result, he has decided that in shaa Allah, his next government will build 16 model secondary schools in Zongo communities in each of the sixteen region,” Dr. Bawumia said.

“This will be a special senior high school, which will focus on educating children within Zongo communities.”

The Virtual National Eid -ul Adha prayer was observed by a limited number number of people at the Ghana Broadcasting Corporation in line with COVID-19 restrictions.

The National Chief Imam, Sheikh Osman Nuhu Sharubutu, who led the prayers which was broadcast live on television, prayed for Ghana, the President and his Vice, as well as the people of Ghana. 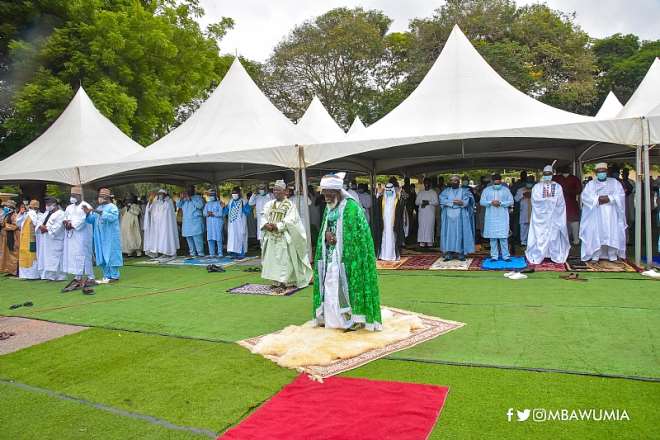 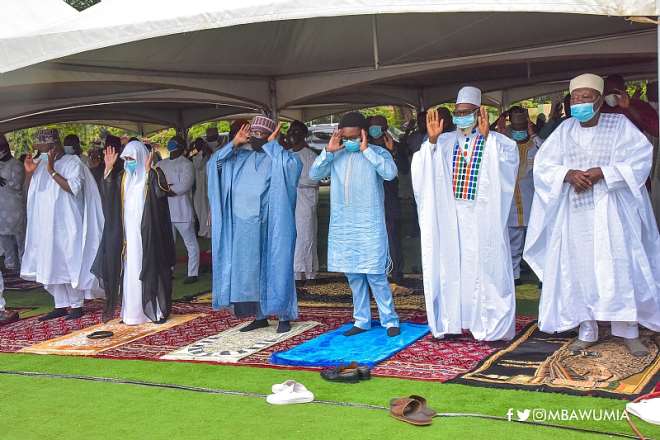 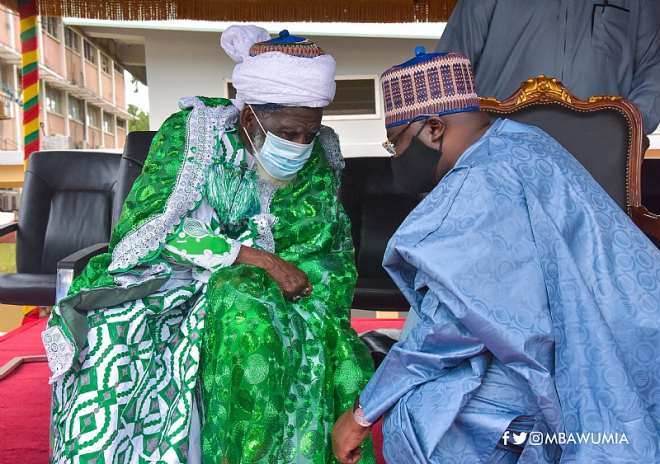 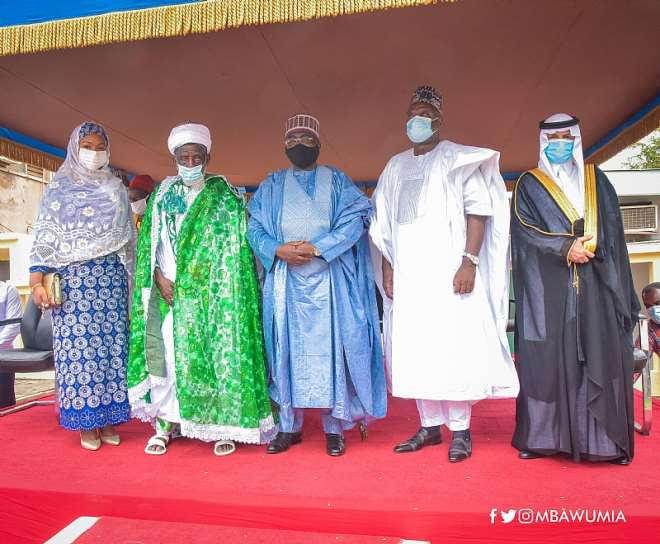 Teenagers Notice Girl With ‘Dad’ Acting Strange, They Follow Her Because They Knew Something Is WrongHorizontimes

Water Park Bans Mom Over Outfit, Has No Idea How Far She’s Willing To GoFree Hub

13 Year Old Builds House For $1500: Look When He Opens The Door And Shows The InsideOceandraw

Why There Are Two Holes On A Soda Can TabHabit Tribe

Dog Stares Out Window Every Day. When Mom Realizes Why, She Puts This Sign Up (2)Interesticle

The Media Foundation for West Africa (MFWA) has said the National Communications Authority (NCA) is deceiving the public on the details of a request...
Read more

A Ghanaian pastor has been arrested for shooting his wife dead in the American city of Orlando, Florida. Sylvester Ofori murdered his wife Barbara Tommey,...
Read more

‘Mahama has shown he is a walking, breathing, laughing insult’ – Elizabeth Ohene attacks

The Media Foundation for West Africa (MFWA) has said the National Communications Authority (NCA) is deceiving the public on the details of a request...
Read more
Entertainment

Stereotyping and trolls have made me a better broadcaster – Serwaa Amihere

Host of Gh One TV’s morning show, Serwaa Amihere, has revealed that she leaves some interviews to her male co-host to handle because of...
Read more
News

A Ghanaian pastor has been arrested for shooting his wife dead in the American city of Orlando, Florida. Sylvester Ofori murdered his wife Barbara Tommey,...
Read more
Politics

Prof. Ahwoi recounts how Dr. Tony Aidoo was given a hefty slap in traffic

Dr. Tony Aidoo, a former Deputy Minister of Defence under the erstwhile Jerry John Rawlings administration is reported to have had a hefty slap...
Read more